MACBETH
A PUPPET- AND THEATRE SHOW, FROM THE MAKERS OF A MIDSUMMERNIGHTS DREAM, BLOODY HARD AND POETIC.

Macbeth and his friend Banquo are fighting hostile armies to serve King Duncan and his son Malcolm. One night they encounter a witchy person casting the strangest spells. Macbeth will soon be emperor of Cawdor and later even become king of England. Banquo will never be crowned himself but his son will. Macbeth and Banquo don’t know what to think of all this but they are impressed. A little while later a messenger delivers the royal message that Macbeth is to be Lord of Cawdor. The first spell has come true and Macbeth starts to dream about the second one… To achieve this the only thing he has to do is to eradicate one…. ‘stone’ . He tells this whole story to his wife Lady Macbeth. She is a woman desperately wanting to become queen, if necessary without mercy.Fate allures to them for the king pays them a visit home. Together they conceive a plan to kill the king.

‘Macbeth’ deals with the universal feeling of the hunger for power. And also about the means we dare to make use of to achieve our goal or the boundaries we grope step by step. Together we dare to do things which we would not dare to do on our own. The fact that the stratagem of the enemy can be used by the king in such a simple way meaning Macbeths ending, turns him into a tragicomic and thus strong theatrical character. 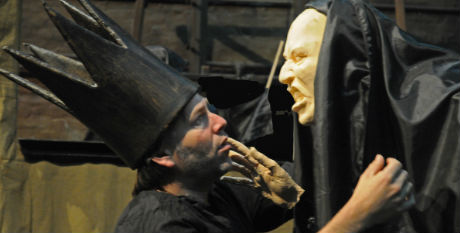