A fascinating trip through the underwater world of THE LITTLE MERMAID.

Just like any other teenager, she also falls in love. However, she falls in love with the wrong man! It's a man with legs, who breaths air and sings like a mussel. Despite the advice of everyone who loves her, the little mermaid follows her heart. Scylla, the seawitch, takes her benefit out of the situation and closes a deal with her. The little mermaid exchanges her voice, her heart and her soul against a few legs.

A fairytale perhaps, but one with a bad ending...

A musical performance underneath a mirror of salt water and a desperate love.

A theatreparty for everyone who wants to fall in love. Based on the brilliant libretto from Judith Herzberg with live music, actors, dolls and film.

Everyone knows disney's version from this beautiful tale by Hans Christian Andersen. But we DON'T play this version! Judith Herzberg wrote in 1986 her own libretto of the story, played by a Dutch company named Orkater. It became a very dark adaptation of the original story about desperate love, juvenile hubris and the beauty of the naive little mermaid. We've worked with this magnificent text to give you our own version in a unique play called 'ZMRMN'. 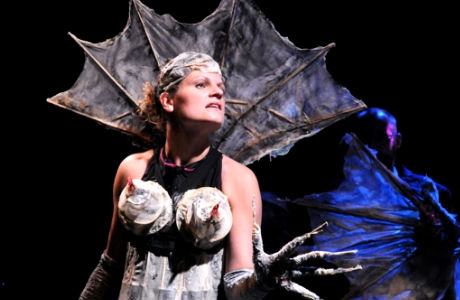