The amazement of the mask Wouse.  For adults of 14 and older.

The creation of the theatrical persona James Ensor is most of all a reconstruction of the dialogues he had himself with his creations. Ensor created a fictive Ensor who lived as a person in his work.
The dialogue with the painted Ensor is very realistic. He talked with Death and tried to become Death and after that even God…
We do not know if this has to be considered as a joke or a way to survive. In fact, that is the question the performance asks.

The artists life is full of anecdotes. As a little boy, he came into contact with a woman who had a bordello nearby his house. There, James found a suitcase full of strange costumes and masks.
Ensor carried these images with him through the years and used them later on in his work.
The paintings were a choc for the members of the high society. The elite group of critics hated his work. Ensor reacted in his legendary letters.

Until the end of his life, Ensor was a lonely man who was fascinated by extreme human feelings and tortures. People called him the walking statue.
When he got his fame and his own real statue, he used to make a walk to it every day.

The performance Ensor is not a biography. It is a mix of text, dialogue, music (live by Bo SpaenC) in search of balance between the subjective and the figurative. In search of the secrets of James Ensor. Helped by the diaries of Madame Wouse.
Jan Maillard

Jan Maillard has been planning this biographical project for years. Ensor, the man from Ostende, inspired many generations and got famous for his maskerades, the arrival of Christ, his self-portraits and hundreds of his sketches, drawings and paintings. Why did he do it? What was his calling? Why these macabre ideas and his religious thoughts…? 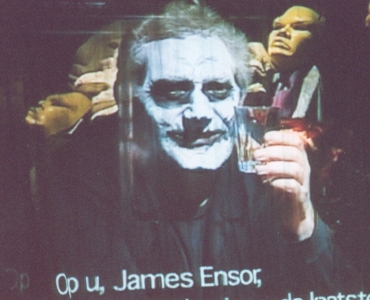