ROM in coproduction with Theater Stap
BEAUTIFULL SPECTACLE IN TENT WITH MENTALLY MINOR ACTORS LIVEMUSIC, VIDEO, ACTORS, SINGERS AND PUPPETS
Sarina and the marionets of love
This production will be inspired by the silent movie 'THE UNKNOWN' Alonzo, the armless' by Ted Browning (1927) and will play mostly in a 'festival'-setting; since that is where it's ment to be played!

The play is in English spoken with the original movie-text.
There are subtitles in any language we need.
The story abouth the armless "knifetrower" Alonzo who goes over the top for his real love Sarina.
Rom is played with Theater Stap, the theater with people who have the Down syndrom.
Puppets, video, beautifull music, songs and actors are giving this spectacle a fantastic drive.
Rom is played this summer in a gigantic Maroc tent for 360 people on a central stage-catwalk with a public on both sides.
This production can also be performed in other tents our location.
Entertainement on artistic hig level for evryone from 10 years on.

Browning cast Chaney in two subsequent 1926 productions: THE BLACKBIRD and THE ROAD TO MANDALAY. It was a chemistry that obviously worked, and never more successfully than in the 1927 film, THE UNKNOWN, a classic that would become the signature piece of both Chaney and Browning. A wild circus drama spun around Chaney's role as a fake freak, *Alonzo The Armless*, the film also showcased the talents of a young Joan Crawford as the beautiful circus performer and love interest, Estrellita, who suffers from the strange sexual phobia of being repulsed by the embrace of a man's arms. To win her love, Alonzo blackmails the doctor into amputating his arms, which are usually tied behind his back during his performance, only to discover that she has finally overcome her aversion to the male embrace thanks to the patient attentions of the circus strongman. 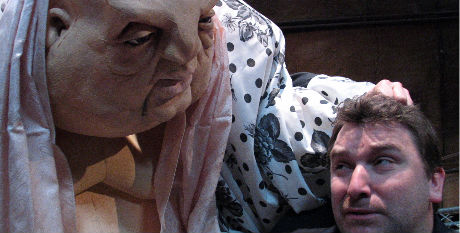