MIDSUMERNIGHTSDREAM
A production with fire, puppets, water, actors, sand, video and live-music based on Butto and Bunraka theater concepts.

A play with a danser, two actors, eighteen puppeteers and five musicians.

A total puppetry party for the biggest among us. the ultimate mix of the oriental and western puppetry culture in the theatre.A puppetry theatre show after Shakespeare, strong but unique. This summernight has been so beautiful but the fate is for hte humans and the divinitys... unpredictable...

"Knack"  "A quiet summernight who paints love like an ideal, FroeFroe vulnerable as never before"

"GVA" A theatre dream in the outside, the diamond of De zomer van Antwerpen ( the summer of antwerp)

"Standaard" A spectacle that finds a balance between art and humour, between the classy puppet and amusement.

A puppet spectacle as you have never seen before, emotional and poetic. The life sized dolls inspired by Bunraku roam around like living sculptures in space, constantly looking for true love. Ludicrous, precious and firsky court jesters tell the tragedy of honor of the emperor and his wife. Elfs, nymphs and satyrs are the inhabitants of the forest. They play a game with the destiny of the children. How will the living people discover the world of the dead and how will love turn into a gamùe of cynism and jealousy?

The spectacle is being played in the outside or in a hangar, a special location, or, with a specific stage setting, in a theatre that is well foreseen. A acting area of 15m width and 15m depth is required. Next to that we also need place for seating tier ( a maximum of 800 persons). We use the space in the open air in a creative way with a atmosphere of lights,sound and fire. We put ready ilumination the sounds and the effects FX, fireworks and water. We also ask you the distribution of electricity when we play outside. The spectacle is a mix of puppets, actors, projections and live music. The performance is done in the language of the land where it is played. In english with subtitles by choice, in accordance with the concept of a silent film is also a possibility but not desirable.

Look at http://kalender.froefroe.be for the available dates. 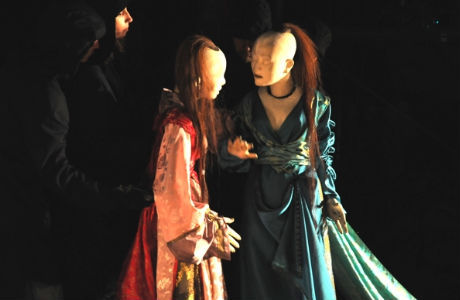