ORFEUS
The Mythe Orfeus and Euridice in a performance with puppets, actors, music and water.
In this performance, we see a confrontation of a classical theme and an original formal concept with water and fire, puppets, actors, and a lot of live music, praised and nominated but especially a very beautiful play for everyone from 10 years onwards.

From his unshakeable throne, King Death has been leering at life for ages.
There, the grass is greener and the girls are so much fresher.
The King knows everything about humanity and he too wants to taste love.
He sends his faithful Ferryman to go get the beautiful Euridice.
Orfee, Euridice’s doltish boyfriend, doesn’t want to let his girlfriend go and follows her.
On his way to the underworld, he meets dying people.
Meanwhile, King Death is preparing his wedding. Euridice is struggling and Persephone, who has been Queen of the dead for 5000 years, tries to stop him.
When Orfee arrives in the underworld, the throne is shaking and the dead are experiencing things they didn’t dare to dream of when they were still alive.

The myth of Orfeus and his journey to the underworld can still be called one of the most beautiful stories about love and death. Within the framework of this classical theme, there are a lot of fantasies about the borders between those two elements. The icons from the original story; Orfeus, Euridice, Hades and Persephone, get a very special humanity. The one-way traffic from here to the other side gets its own face in the character of Charon, the Ferryman and in the stories of the dying people.

A big visual concept with water, fire,.. within a classical theme. Enjoyable and powerful visual theatre for every European.

Nominated for one of the best youthplays of 2005 in the Netherlands.
Can be translated our subtiteld on the videoscreens. 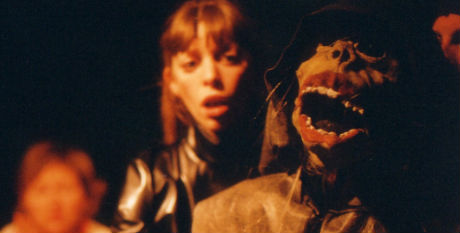